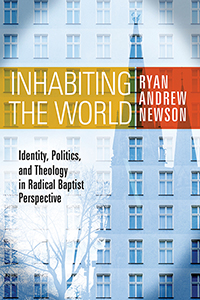 It is now widely acknowledged that the Western world has been transitioning into a “postmodern” context for some time. Many, if not most, of the commitments that gained ascendancy during the Enlightenment are rapidly changing–including but not limited to our cultural sensibilities, manufacturing practices, philosophical theories, and political forms. Given these shifts, the challenge for Christians of all stripes is to strive to faithfully engage this world without acquiescence or retreat. In INHABITING THE WORLD, Ryan Newson argues that resources contained in the “baptist vision” of Christian life are uniquely helpful in describing how Christians might transformatively and receptively inhabit the world as it now is. Newson unpacks the contours of a Christian identity centered around listening–to oneself, to others, and to the wild voice of God–and focuses his argument by engaging the work of theologian James Wm. McClendon, Jr. No mere “report” on McClendon’s thought, however, Newson pushes back on and creatively extends McClendon’s work, including into the fields of neuroscience, political theology, church practices, and ecclesial failure. Crucially, Newson’s concern is less with what this tradition has always said and more with what we should say moving forward, outlining a positive vision that goes beyond merely saying what we are against. Altogether, he unpacks what a radical Baptist identity for today might look like while seeking to avoid many of the dead ends and false starts often associated with this tradition.