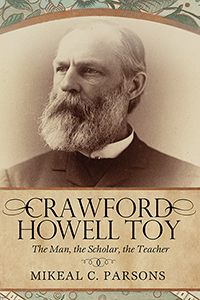 Crawford Howell Toy (1836-1919) was professor of Old Testament at the Southern Baptist Theological Seminary from 1869-1879. In 1879, Toy was forced to resign from the Seminary over his views of evolution and biblical higher criticism. In 1880, he was hired by Harvard University as the Hancock Professor of Hebrew and Other Oriental Languages; Toy remained in Cambridge for the rest of his life (1880-1919). Parsons narrates Toy’s life in two parts. The first, chronologically arranged, tells the story of Crawford Toy from his childhood in Norfolk, Virginia, to his formal education (University of Virginia, Southern Seminary, and the University of Berlin), experiences as a Confederate Chaplain, and teaching career at several institutions in the South. The second part, thematically arranged, examines Toy’s Harvard career as a teacher and scholar with special attention to two significant relationships–with his spouse, Nancy Saunders Toy, and with his former student and Harvard colleague, David Gordon Lyon. Along the way, Parsons examines some of the persisting myths surrounding Toy in light of newly discovered or previously understudied evidence: Toy’s supposed engagement(s) to missionary icon, Charlotte “Lottie” Moon, the events surrounding his resignation from Southern Seminary, and his alleged dismissal from membership in the Old Cambridge Baptist Church. Toy was the first, but certainly not the last, casualty in the struggle between the academic study of the bible in denominational theological education and the confessional commitments of the sponsoring SBC denomination that continues to this day.

Crawford Howell Toy: The Man, the Scholar, the Teacher